After constantly reviewing the forecast for Sunday in the week running up to the Mid-Winters, the Royal Harwich Yacht Club and the N12 Class decided to adjust the programme for the weekend, bringing the sailing forward by 24 hours and keeping the N12 Mid-Winter dinner at the club on the Saturday. As it turns out, with Storm Ciara in full force on Sunday, this really was the right decision.
Unfortunately, a few of the sailors couldn’t make the earlier racing, starting at 10:00, but most managed to still attend the ‘traditional’ N12 Dinner in the evening. A reduced fleet of 7 N12s arrived at RHYC to be greeted with a gentle breeze, a reasonable air temperature and a flooding tide. The attraction of the day was the brand-new Simon Hipkin built National 12 – N 3551, ‘Over The Rainbow’. This N12 is a ‘4-Plank’ Dead Cat Bounce, based on the original Dead Cat Bounce design by Jo Richards, then modified by Keith Callaghan.  Just after launching, champagne was sprayed over the bow before George & Lucy Finch set off for their maiden voyage towards the committee boat, ready for the first race of the day.
After a short postponement, the first race got underway with a clean start from all of the fleet. Racing towards the windward mark was close, with numerous position changes and the top 5 boats all rounding within a boat length of each other. Jon Ibbotson and Rachel Smith rounded first and headed left to cross the tide as soon as possible before starting the running down to the bottom mark. Kevin Iles and Andrea Downham took a more direct route, followed by Tom & Robbie Stewart and George & Lucy Finch. The fleet stuck together for the 2nd lap, with the leaders slowly increasing their led. Jon & Rachel finished 1st, with Kevin and Andrea in 2nd, followed by John and Bryony Thornton in 3rd.
The course was set for the 2nd race – this time a trapezoid. Max Shiel and Will Taylor had now made their way to the race course and were ready to join in. The breeze increased slightly with most helms and crews now sitting on the side. The new N12 of George and Lucy Finch demonstrated some quick speed up the first beat, only to fall foul of a few shifts and round the windward mark 4th, Tom and Robbie were leading, with Kevin and Andrea just behind. They kept these positions for the remainder of the race, with Jon Ibbotson and Rachel Smith finishing 3rd. There was some close racing with George & Lucy and John and Bryony, with John and Bryony pulling through to 4th at the 2nd windward mark and keeping this up until the finish.
The same course was set for the 3rd race and with the tide beginning to ebb, local knowledge became crucial. Graham Ireland and Toby Hunt used Graham’s knowledge (built up over 50 years!) to round the windward mark in 4th, a respectable position as it was Toby’s first ever N12 outing and Graham’s first N12 race in his Admirals Cup Final Chapter in about 5 years! Having had an interesting first leg, George and Lucy had to play ‘catch up’ with the rest of the fleet, leading to a close tacking battle between Graham/Toby and George/Lucy on way to the finish! Tom and Robbie won, with Jon & Rachel in 2nd and Kevin & Andrea in 3rd.
For the 4th and final race, a windward/leeward course was set, as per the first race. With the tide really ebbing, it took a while to cross the start line and a sudden shift saw the whole fleet tack onto port – almost as if they were ‘tacking on the whistle’! Finding the lifts in between the trees on the approach to the windward mark was the tactic of the day, which Tom and Robbie demonstrated to round first. Even with the strong tide, some of the fleet over-stood the mark, allowing a few boats to round just inside them at the mark. Staying as close to the channel with the ebbing flow was the best decision downwind, which Kevin & Andrea demonstrated, securing their 2nd place in the race. Tom and Robbie won again, with John and Bryony in 3rd.
The fleet then enjoyed lunch in the clubhouse, before watching the rugby in the afternoon, with a few enjoying a walk to Pin Mill and back.
The club then hosted the N12 Mid-Winter Dinner, with a number of past and present N12 sailors and class stalwarts turning up to enjoy an evening of good food, good company and good beer. There was some recently discovered video showing in the clubhouse – a N12 Open Meeting from 1989 hosted at the RHYC!

Thanks must go to the RHYC, PRO Mike Clayton and his race team for allowing us to bring the sailing forward to Saturday and run 4 races with a slick turnaround. The fleet decided the event was a success and look forward to returning again next year for this revived annual event.

Thanks also to Pavel Kricka for taking some excellent photos, available here:
https://www.flickr.com/photos/pavelkricka/albums/72157713029125418

Whilst many Solo helms decided to sit out Storm Callum at home, a lucky 10 Solo helms braved yet another storm forecast to travel to sunny Suffolk.  Whilst everyone was checking the various wind apps, delighted with the array of scary colours indicating unsailable conditions, it was actually very sailable.  A few helms were smugly snapping photos of the sunny river Orwell to send back home to those that they left in the pouring rain!
With a very relaxed 1pm start to accommodate the best of the flooding tide OOD Dr Chris Brown organised both the Laser and Solo fleet initially in a short warm up windward-leeward course to begin the 4 race series.  With the windward mark quite tricky to see in the dazzling October sunshine the fleet buzzed the start line in a nice 15 knots-17 knots, and the leeward mark close to the lee shore.
The pin end was favoured, and chosen by local h 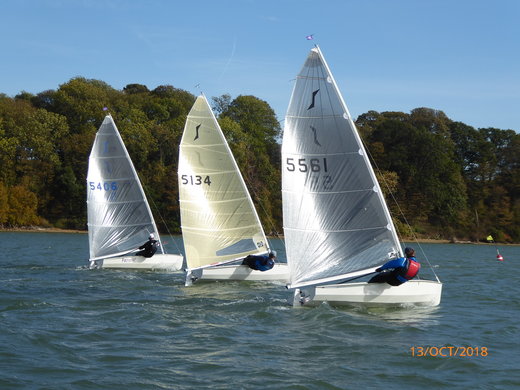 elm Chris Mayhew who popped out and headed uptide inshore, managing enough boat speed to tack and cross the fleet to reach the windward mark first.  Second at the windward was Robert Lawrie from Harlow Blackwater SC, closely followed by Jarvis Simpson from Brightlingsea.   Down the run Mayhew extended with a direct course to the leeward mark, but closing up was Tim Lewis from Island Barn taking a direct route with Lawrie putting in a later gybe.  With helms in short sleeves enjoying a refreshing spray on a beautiful October afternoon the hectic, Mayhew was first, with Lewis launching into second ahead of Laurie and Simpson.
Everyone caught their breath, but not long race 2 was off on the same windward-leeward, but this time the windward mark was on the other bank, barely to be seen in the sunshine.  The tide still flooding meant the pin was still favourite and Mayhew again escaped left, but after tacking and crossing on port again it was looking good.  With the longer beat the fleet spread out and Laurie looked to have gone too far left, but came in with a cracking lift to round first, followed by Mayhew, Simpson and Lewis.  With the wind on the increase care was taken for the gybes, especially with the leeward mark near the lee shore.  Trevor Whiting from Wroxham and Derek Mayhew from Royal Harwich were having a good battle in sixth and seventh which at one stage looked a little damp as they checked their self-bailers for weed.  The wind still fresh saw a continuing fight between Laurie and Mayhew with Mayhew sealing the win from Laurie, Lewis and Simpson.  Doug Latta the furthest traveller from HISC/Portchester SC and fresh in his Presidency of the Solo Class was putting in another consistent 5th.
In Race 3 the OOD introduced some nice reaches and a triangular course, the high tide allowing the sailors to make the best of the strengthening breeze. 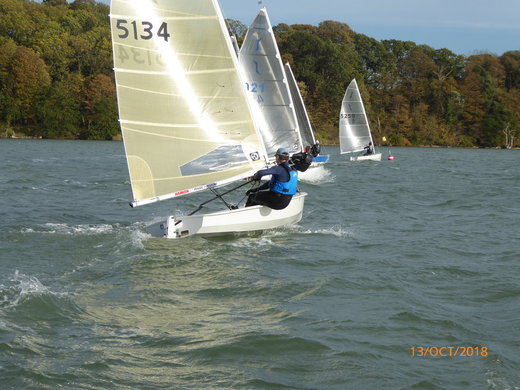 The beat a little bit longer, crossing the tide.  The fleet all started very closely, but Simpson was seeking an advantage – unfortunately he was over the line, but luckily returned to give himself a handicap.  With less tide in this race the beats were more even with lots more tacking on the shifts.  The wind was still shifting considerably at the top mark and only the brave arrived on the lay line.  Lewis rounded first with a close pack or Laurie, Mayhew and Simpson.  The reaches were fast with lots of close racing, the first reach across the tide slightly closer.  Two laps again saw lots of place changing with Lewis taking the bullet from Mayhew, Laurie, and an improving Roger Wilson from Rollesby Broad SC in 4th.
Race 4 was again a triangle in the most wind of the day.  Another close start began and this time with the tide ebbing in places was all to play for.  The shifts kept everyone alert and Laurie got away nicely to dominate the final race.  The following pack was close throughout enjoying some nice physical reaches with everyone questioning that it was October and they were hot on a breezy day!  Wilson put in an impressive result to improve consistently during the day to finish 2nd ahead of Mayhew and Lewis.
The fleet returned ashore to enjoy the remainder of the sunshine and a cold beer in the clubhouse.
This concluded the 2018 Solo Sea Series and a thoroughly enjoyable day.  Next time hopefully without the threat of Storm Callum it might encourage a few more sailors to enjoy the great racing and conditions in this neck of the East Coast – you are all more than welcome – put it in your diary next year!