Yacht Racing in the RHYC Diary
More information can be found on yacht racing by clicking on the two links below:
http://www.havenseries.org/index.html

Yacht racing doesn’t necessarily make the ‘noise’ of dinghy racing at the club but there are a number of active members as well as a number who compete occasionally. In normal times this has opened up opportunities for club members to crew on other boats but unfortunately not in 2020. It has been as badly affected as all other racing in 2020 but the Haven Combined Clubs series has been very ably manged by club member Ed Harrison and his team who have put on a reduced calendar of events.

Whilst some of the competitors are stripped out racers with the latest laminate sails, many are cruising boats with white sails and varying degrees of cruising paraphernalia (or beer) remaining on board. The intention is for around 3 hours of racing for the front of the fleet. 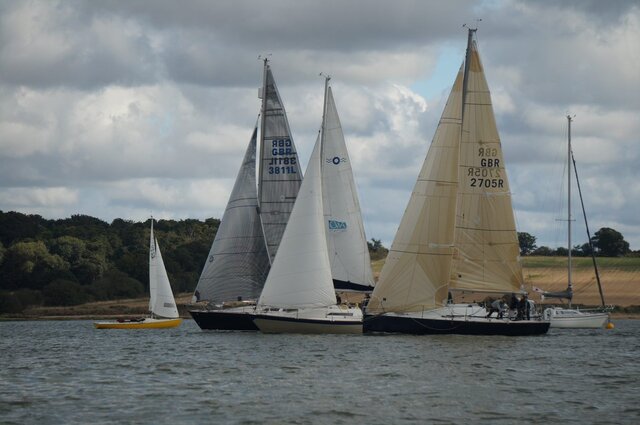 The Summer Short Handed Series was intended to be family or ‘bubble’ only crews with the options of long and short courses and white sails only or spinnakers. Ed has been getting to grips with is new boat Entropy, while other club boats Jameerah, Time Off II, Allegro, Petra Ann, Jester, Loup de Mer and Madicken all competed in the series. Unfortunately Race 3 was cancelled due to high winds.es of cruising paraphernalia (or beer) remaining on board. The intention is for around 3 hours of racing for the front of the fleet.

The Autumn Mini Series was intended to allow more fully crewed boats but started just as the ‘rule of six’ came in so the committee asked everyone to respect that  on the first race on 12th September. In that race Loup De Mer sailed the short course while Jester, Entropy, Sea Shanty , Time Off II and Nushaba all sailed the long course. There is intended to be a final race on 26th September for anyone who is interested.

Meanwhile at the club 2020 Regatta Sea Shanty, Loup de Mer,  Entrophy, Petra-Anne and Koco all sought to compete but the weather gods only allowed the first two to finish on the first day of racing.